As mentioned in Part 1, there are two camp grounds in the Cape Le Grand National Park.  While the LeGrand beach campsite provides a more sheltered spot, we elected to go to Lucky Bay, the beach famous for it’s kangaroos.  We weren’t disappointed.

The facilities at Lucky Bay were built in the 70’s and are both dated and limited.  The showers were frequently cold.  New plans to renovate and expand the camp ground were published while we were staying there that would almost double the size of the place and install new amenities.

The place was very busy and full to capacity every night.  We were lucky to have had a choice when we arrived as the day we departed there were already three caravans queuing up for a spot as we left at 9:00am.

Not long after setting up we saw the first the kangaroos as they came scrounging around camp on the look out for food. The kangaroos are so used to people that they have become almost tame.  We saw one actually try to take a can of beans out of the hands of our neighbours before he gave it a smack to chase it off!  We quickly learned to shuffle our feet on the ground to make some noise and dust to move them away as they were not concerned about being yelled at!  Our last few slices of bread vanished one night when we neglected to store it properly … we discovered the empty packet next to some roo poo on the floor the next morning.

Despite many signs advising visitors not to feed the kangaroos, we saw several day visitors feeding and encouraging the roos. This just encourages their unnatural behavior and could lead to them becoming threatening to visitors.

The Lucky Bean mobile café cart parked up on Lucky Bay beach most days. They make a great coffee made with beans sourced from Queensland. We even tried the kangacino – which is kind of like a mocha plus a few maltesers thrown in for good measure.  It was pretty good.  They also sold ice creams, drinks and snacks. 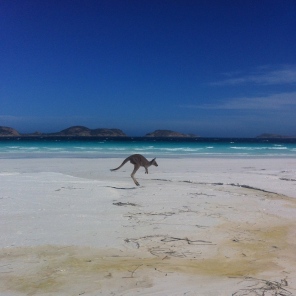 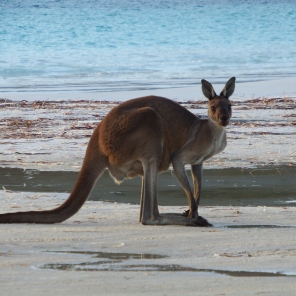 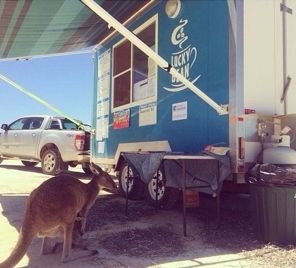 We were blessed by the weather gods and enjoyed beautiful warm sunny weather while at Lucky Bay.  While nearby Esperance was sweltering through some hot days, Lucky Bay was around 10 degrees cooler.

Apart from the walks we mentioned in Part 1, we spent a fair bit of time on the beach.  Driving down onto the sand we parked the car as a windbreak before setting up the shade awning. Taking the fridge with us meant that we could access cold drinks and food so could spend several hours relaxing, reading and swimming.

We ended up staying for 9 nights and thoroughly enjoyed the slower pace of this paradise.