After extending our stay in Perth to catch up with an old friend (Thanks for a great night out Dave) and complete some maintenance tasks on the car and trailer was time for us to move on.

We had been watching the weather reports so were aware that cyclone Olwyn was battering the north west coast of WA, but hadn’t really concerned ourselves with it too much. Until we realized that instead of following the usual cyclone course inland and dying out, this one was following the coast line south and was expected to affect areas as far south as Jurien Bay. Jurien Bay was where we were headed. Although we had weathered storms in our tent before, it’s not fun.  It was time to re-think our plans.

As we’d already come from south of Perth we didn’t want to double back there, so decided to head inland eastwards. Picking a spot on the map about three hours away we set off towards Wagin.

We checked out the caravan park in Wagin, but the sites weren’t suitable for our camper trailer. We headed another thirty minutes down to road to Woodanilling where we set up camp for the night. 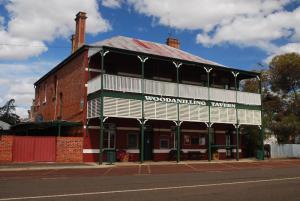 Once set we wandered into town and found the local pub. A couple of beers later we were chatting with the landlord and discovered that he expected that there would be quite a few people in the pub that night as they were doing the ‘big shave’ as a fund raiser.

We stayed and had a very nice meal in the restaurant/bistro area. By the time finished dinner and returned to the main bar the place was pumping and we got chatting with a couple of the locals. It turned out they were shearers and had just finished the season’s shearing.

One of the lads was having his head shaved later in the evening and explained that it was kind of an out for him and his mate who had made a bet 18 months ago about who would cut their hair next.   Subsequently they both had long hair neither having cut their hair for intervening period.

The night rolled on and more drinks were consumed. The razors came out and several blokes went under the shears.  The mood was very jovial and we had a great night.

Every Cloud Has A Silver Lining

Although not on our initial itinerary, we were glad to have the chance to see another ‘Big Thing’.

The sheep industry is the main income for this region and this is reflected in the Big Ram. A large fiberglass structure perched atop a steel frame to display. 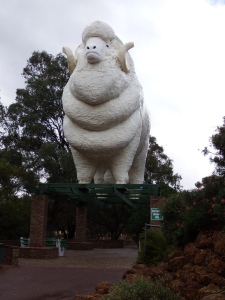 Although cyclone Olwyn was downgraded to a tropical storm and continued to weaken we kept an eye on the weather. The front eventually came through late in the afternoon. There was no accompanying winds that we were concerned with, just a consistent rain for several hours.

We packed up a wet tent the next day and headed back towards the coast.