We turned off the Gibb River Road onto the Kalumbru Road heading north. The corrugations were horrendous and we spent over an hour shuddering and jarring along.

Finally, we arrived at our destination, Drysdale Station. We elected to stay at the homestead station campsite with full amenities rather than the miners pool campsite, which is another 10km’s up the road

After setting up we checked spent over an hour emptying and re-packing the car as we were leaving the camper trailer behind for the next stage of our adventure.

Once that was done we wandered over to ‘Annie’s Bar’. We grabbed a couple of drinks and found a spot in the cool of the shade in the garden. We then watched the APT tour bus folk come in. They were easy to spot as they were clean! Everyone else seemed have red dirt ingrained in their clothing – us included.

We decided to try dinner at the restaurant and booked ourselves a table. Craig was glad to see that they had the footy results up – and that his team had won.

The next day we continued north along the Kalumburu Road. Happily the road condition seemed to improve as we headed north and found the Mitchell Plateau Road turn off. The road narrowed somewhat, but was still reasonably level, however the odd rocky patch meant speeds remained low.

We came around the bend and found the APT tour bus stopped and tourists all over the road. Emma was driving and soon discovered that they were stopped (presumably for morning tea) at the picturesque water crossing of the King Edward River.

This would be Emma’s first water crossing and she had an audience taking photos. Taking a moment to select the right gears she drove across river crossing. A causeway had been constructed using the river stones so it was not difficult.

After passing the King Edward campground the road into the National Park deteriorated further and it was slow going. We arrived in the Mitchell Plateau Campground exhausted. We set up our small tent and air-bed before heading off to see the helicopter. We put our name down provisionally for the waterfall sight seeing trip, pending if we could find another couple to share the cost. Helispirit were quite flexible and said if we couldn’t find someone for the next day they would try again for the following day. 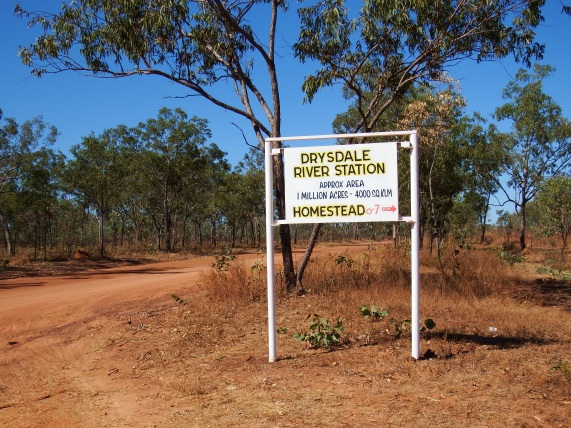 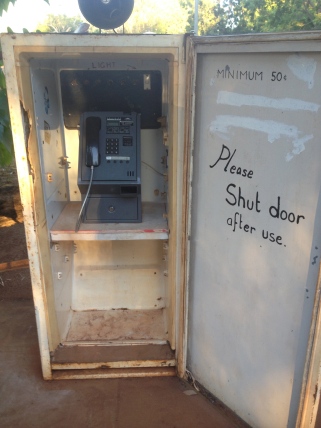 Dingo we spotted on the Mitchell Road 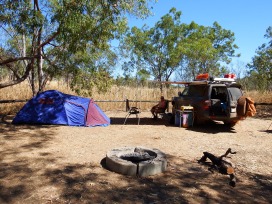 Eat Our Dust! on the Kalumburu Road

Before the sun went down we headed back out to the only area within the National Park that firewood collection is allowed and gathered as much as we could fit on the roof rack. We ended the day with a few beers around the campfire.

The next morning we were up early as the rising sun beat down on our tent heating it unbearably. Craig headed over to the helicopter depot to find out if anyone had wanted to do the scenic flight with us.

He returned a few moments later explaining that we were booked in for the tour this afternoon. Pick-up wouldn’t be until later than we preferred, but we were booked in! We prepared our packs for the day and headed back over to the helicopter depot for weigh in and the safety briefing.

As pick up was going to be later than we had initially planned so we had time for a big breakfast in camp before hitting the trail.

One thought on “Mitchell Plateau – Part 1”