After crossing into Queensland we had an overnight stay at Camooweal before heading north to Boodjamulla National Park. It was fortunate for us that the national park camping was fully booked, as we headed to nearby neighbour Adels Grove instead.  Having spent the past several months in dry dusty dirt, arriving at Adels Grove was like entering paradise.

Adels Grove is around 80 acres of lush oasis named after Albert De Lestang’s initials. Albert, also known as ‘The Frenchman’, ran the property as an experimental botanical garden for years. Unfortunately a fire destroyed most of his plants and buildings in the 1950’s and he left shortly afterward. It was opened as Adels Grove campsite in 1984.

There is a range of on site accommodation options as well as a choice of campgrounds. We went with the top campground so we could get plenty of sun on our solar panels, however the shaded grove area alongside the riverbanks was very pretty.

Inner tubes are available to hire for gold coin donation to the Royal Flying Doctor Service. We spent a lot of time lazing on the tubes as we floated on the river amongst spectacular scenery.

There is a large decking area used for the bar and restaurant in the evening, but is available for use during the day. As this is the only spot to receive Telstra signal it’s quite popular.

We were here for Craig’s birthday so decided to book in to dinner for the night. The tables are shared and we had a great night exchanging tales with other travellers.

We managed to do all the walking trails in the park except for the Upper Gorge Lookout. After speaking to the ranger we discovered it was closed as they’d seen a rogue water buffalo on the loose in the area. The ranger pressed us to obey the closure signage, giving us quote of the year when he said

“The last thing I want to see is you come flying past at a dollar-ninety with a water buffalo up your clacker”.

Cooking on the campfire at Adels Grove

Catfish under the bridge at Boodjamulla NP 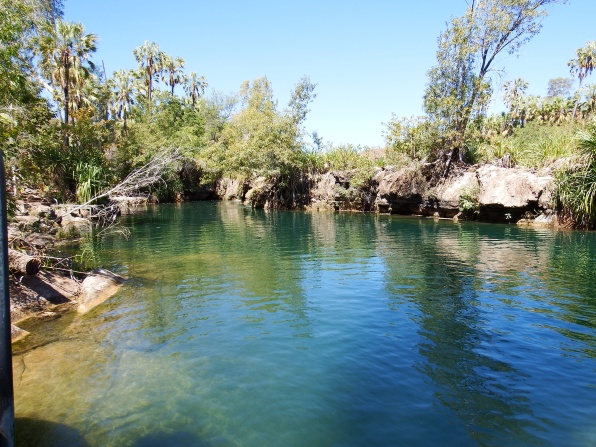 View from Indarri Lookout down to the Cascades at Boodjamulla NP

Looking back from the Stacks walk at Boodjamulla NP

Walking trail under the palms at Boodjamulla NP 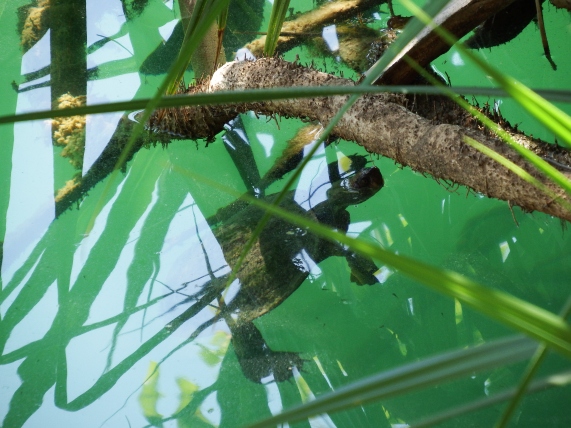 Turtle swimming in the cool green waters of Lawn Hill

A short trail meanders alongside the water before a bridge crossing. The trail leads up a steep incline. At the top the trail levels out before circuit around the stack proving breathtaking views of the river and gorges below.

Crossing the river at the same point as the Island Stack walk the trail instead leads along the valley of the gorge to the sacred rock art located in the shadow of the stack.

This slightly longer walk follows alongside the water for slightly longer than the previous two walks before heading up a long slope and looping around the top of the plateau.

The trail leads in the opposite direction of the previous walks heading upstream before turning away from the river. We crossed open plain before turning back to the river. We rested at the Cascades, a swimming hole at the base of a small waterfall in the course of the river. Then headed up the rocky embankment to once again take in the spectacular landscape. Continuing on there is a second lookout point before the trail heads down a fairly steep rocky staircase.

Adels Grove runs canoe hire from both the campsite and a spot within Boodjamulla National Park. We gave it a whirl and had a great time. There is no fast flowing water and we had an easy paddle up stream. At the Cascades there is a station to disembark and drag the canoe out of the water. There is a short track that we had to carry the canoe over before climbing in and continuing upstream.

Further upstream there is another small waterfall. The scenery along the way is stunning. Sections of covered in large lily pad leaves, steep gorge walls rising straight up from the river edge, palm trees and low overhanging branches where we spotted wildlife like birds and turtles the outlook was ever changing.

We had an absolute blast and were able to take it easy on the paddling going with the current on the return journey.