The Kalbarri National Park encompasses two distinct areas. Along the coastline and inland along the banks of the Murchison River.

There is no camping in the park, but there are several hiking trails. We were excited to get moving again after rather sedentary life since hitting Margaret River.

The first trail we tackled was loop.   Stairs descended from the car park and a level path started the walk before changing to uneven rock surface. Around 500m in we arrived at the famous Natures Window. As we had started early to avoid the heat we had the spot to ourselves for a moment.

Continuing on the path hugged the edge of the cliff before ascending to the flatter top. We tracked about 3km along the cliff top stopping occasionally to admire the spectacular views over the Murchison River before descending steeply to the rivers edge. From here the trail follows along the riverbank before heading returning to the starting point. Unfortunately due to the heavy rains dumped inland by cyclone Olwyn, the river had flooded and the trail was closed from here on so we returned along our original path.

Despite the futuristic Jetson-like picnic benches, which contrasted against the ancient landscape, we elected to eat our picnic lunch in the car due to the horrendous amount of flies.

A quick stop at nearby lookouts, we decided to leave the Z-bend hike to the next day. 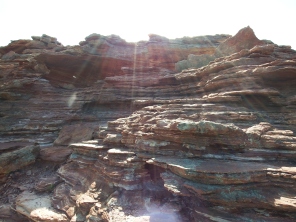 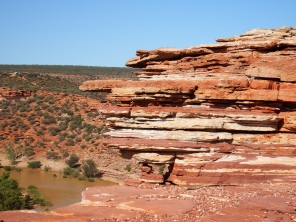 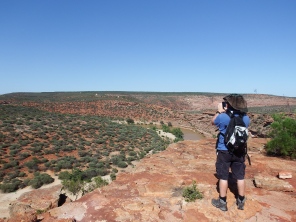 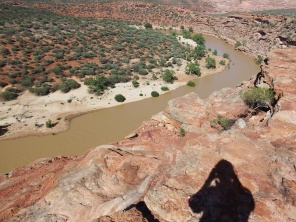 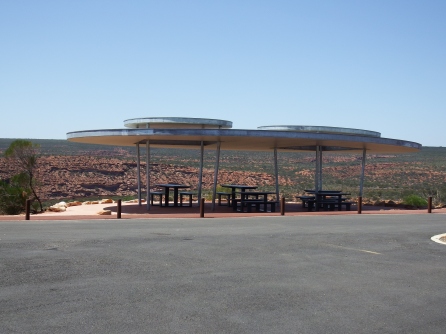 Having rested our feet from yesterdays hike we set out early again. The Z-bend look out is a short walk along relatively flat ground. The look out provides amazing views of the path of the Murchison River from the high vantage point of the cliff tops.

Carrying on along the path we found ourselves scrambling down between narrow rock gullies and down ladders until we reached the riverbank. What goes down must go up and we found the going a little more difficult on the return journey. However we covered the 2.3kms with no problems and made it back to the car just before the heavens opened. 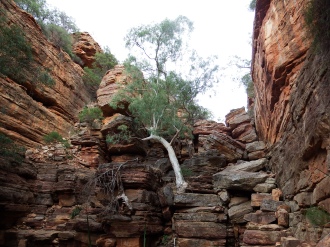 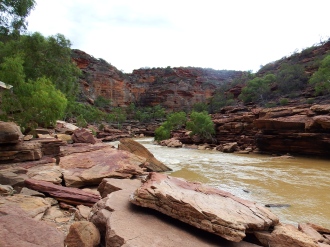 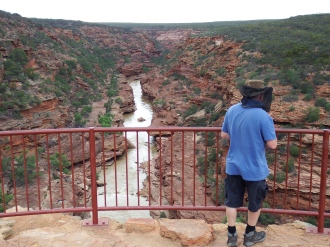 One thought on “Kalbarri National Park”