It was love at first site when we arrived in Broome.

The sun was sparkeling on the incredibly blue waters of Roebuck Bay as we set up camp on the beachfront.  The lush gardens featured the distinctive boab trees along with the shady fig trees and tropical palms. The warm air surrounding us was scented with the perfume of the frangipani. We felt like we’d arrived in paradise.

As always our first destination was the local visitor centre. We knew that the staircase to the moon would be visible again that night and discovered that there is also an accompanying night market.

We spent the afternoon lazing in the shade to escape the heat of the late afternoon.  Browsing over the brochures we’d picked up at the visitor centre we planned our activities for the next few days. 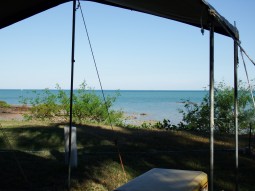 View from our tent

The Broome Staircase to the moon night market

Staircase to the moon, viewed from Broome

As the sun began it’s decent over the horizon we headed to the night markets.  The atmosphere was quite lively. Music was playing, fire dancing and juggling were being performed within the arena created by the ring of vans selling hot food and a variety of jewelry and crafts.  We wandered around the stalls before setting on what we’d have for dinner.

We found a picnic bench and tucked into our food.  The moonrise was quite a bit later than when we were at Point Sampson and we had a bit of a wait, however it wasn’t too arduous to sit on the soft grass on the beachfront and enjoy the temperate night air.  A couple of fruit bats were feasting nearby fig tree, we watched as they took off into the air to wheel about in the night sky.

The moon finally began to rise on the horizon and we watched as more and more of the ‘stairs’ were created on the mud flats.  Once the moon was sufficiently high we headed back to the market for an ice-cream before heading back to the caravan park.  We had neglected to bring a torch (rookie mistake!), but managed to find our way back to camp without incident.

The city of Broome was founded on the strength of the pearling industry. In the beginning unscrupulous captains would force local aboriginal people to dive by holding their families hostage. This practice was eventually outlawed and not wanting to risk their own lives in the dangerous pursuit of diving for pearls, foreigners were recruited. This led to Broome becoming the most cosmopolitan and multi-cultural city during its heyday. A large number of Japanese became well known as expert divers and their influence on the town remains today.

Once filled with saloons, upmarket pearl shops and other boutiques now populate China Town.  We had a brief stroll around before visiting the Historical Society Museum.

We visited the museum for an interesting insight into the history of pearling in Broome. The displays included an old bell diving suit, including the brass helmet. It was amazing to see the size and weight of the item. Hazards faced by the divers included the cold water temperatures, shark attack and the bends. Around one in ten divers lost their lives.

The samples of products made from the pearl shells were also remarkable to see. The pearling industry waned with plastics replacing it in many of the products.

It wasn’t until the discovery that pearls could be cultivated that the pearling industry revived.